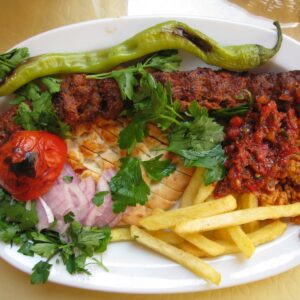 Kebabs are usually made out of ground lamb meat and tail fat, though there are many regional variations. Kebabs are fairly common in the area from Mersin in Turkey to Kirkuk in Iraq, and includes Aleppo in Syria. According to many authors, this kebab was born out of a fusion of Turkish and Arab cultures. Birecik, once an important locality in the Eyalet of Aleppo, is said to be the creator of this very kind of kebab. The version prepared and consumed today in the province of Adana also has a history rooted in the modern Turkish culture, only to receive a “Controlled Designation of Origin” in February 2005, after subsequent legal trials.

Ezmeli Kebab $12.00 Ezme (Turkish-style tomato salsa) is one of the most popular dishes in Turkish cuisine, and can be served as a mezze or salad. The most important trick in making this recipe is to chop all the ingredients finely with a sharp knife. Ezmeli kebab is on ... [+]

These are the signature kebab dishes named after Turkey’s two most famous “kebab cities”, Adana and Urfa. Both of these kebabs are made with ground beef or a mixture of ground beef and lamb kneaded together with onion, garlic and spices then packed by hand around large, flat metal skewers.

There are no reviews yet.

Be the first to review “Adana Kebab” Cancel reply 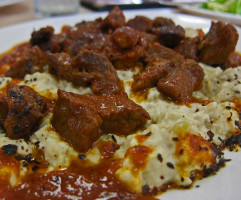 When you say kebab, most Americans think of a doner kebab – shaved meat wrapped in flatbread with ad ... 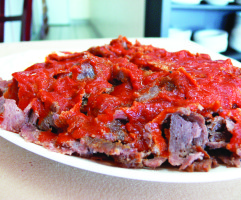